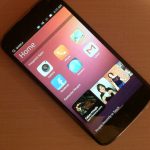 Developers got their first hands-on peek yesterday of Canonical’s Ubuntu Touch OS for mobile phones, with the release of the first developer beta. So did I.

The good news: Ubuntu Touch is a more compelling mobile environment, even in the first developer version, than I expected. It borrows heavily from other mobile UIs, including BlackBerry 10, the iPad, Android, WebOS, and Windows Phone, yet manages to feel like its own OS. It’s much too soon to rate, but the OS is promising, for reasons I explain shortly.

The bad news for eager users: This is a “don’t try this at home” release, which the formal instructions do not strongly clue you in on. And you can install it on only a handful of Google devices, including the Galaxy Nexus smartphone, Nexus 4 smartphone, and Nexus 7 tablet, and doing so wipes out the Android OS on them. You need to first unlock the bootloader on the Android device (easily done), run the installer from an Ubuntu Linux PC or a VM running that OS, then go to the Terminal and issue the various Linux commands to download and install the system image. That’s not so hard, but you need to make sure the Android device doesn’t fall asleep during the install — the install aborts if it does.

After the install is done, you get an opening screen that shows you how many tweets or other social media updates you got. You’ll be tempted to tap that indicator to open the relevant app, but nothing happens if you do. No amount of swiping on the main screen does anything, either. The trick — and it’s not intuitive — is to swipe from the left edge of the screen to open a scrolling list of app icons. Tap one to jump to it. Now you’re in.

Once you have an app running, you can navigate the device by swiping iPad- or WebOS- or BlackBerry-style horizontally to page through the open apps. A tray of icons appears briefly at the bottom of the screen as well, with icons for the Apps screen, the Home screen, the Music app, the People app (very much like Windows Phone’s same-named app, which lets you see the latest posts from all your contacts), and the Video app. That tray disappears too quickly, and the only way to get it back is to swipe horizontally on the screen as if you were paging to the next app.

A few icons reside at the top of the screen for search, email, sound, Wi-Fi, device (battery status and screen brightness), and date/time. As with Android, you swipe down from them to open a tray with relevant options, such as a list of available Wi-Fi networks to connect to. The icons are small and closely spaced, so it’s easy to open a different tray than expected. The Search feature didn’t seem to be working yet — I couldn’t open it, anyhow. And the network connection came and went.

If you tap the toolbar, rather than drag down from an icon, you get the Devices tray that has a bunch of settings such as Airplane Mode and volume control as well as quick access to the other trays.

Red Hat Enterprise Linux 7 (RHEL 7) and CentOS 7 come with the new naming scheme for the network devices. These features change the name of network interfaces on a...

Collectl is a linux performance monitoring tools that grabs as much detail as possible from the /proc filesystem and it does a lot more than most other tools. Compare to...

How to Install and use Glances – System Monitor In Ubuntu

There are various default system monitor tools in Ubuntu that come with basic functions. However, there is recommended powerful free monitoring called Glances – An eye on your system. Glances...

How to Check Android Update on HTC Smartphone

There is easy way to check whether your android install with latest software or not. Before start, make sure you have connect your android phone to internet using mobile data...

How to Configure and Create Apache httpd VirtualHost on Fedora 16

In this post, i will show on how to configure apache httpd and create VirtualHost on linux Fedora 16 server. Assumed that you already install apache httpd server. 1. Modify...