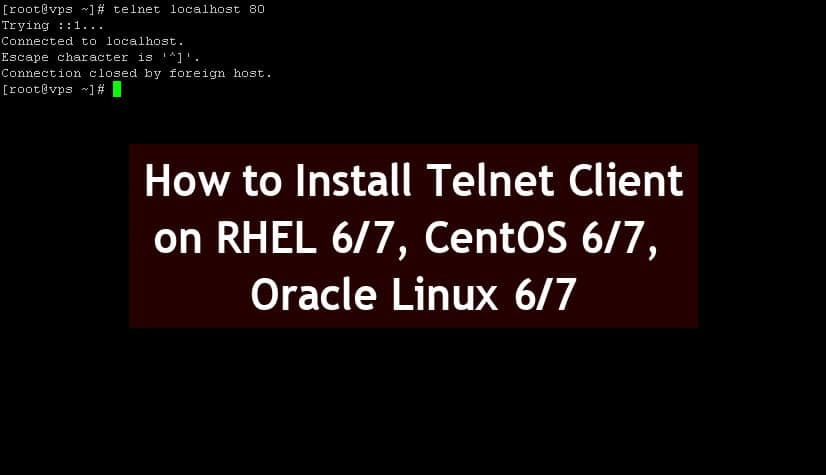 Telnet is one of the most frequently used software by the system administrator, program developers and anyone who needs to use the application or data that is located in a particular host computer.

It is a network protocol used on the internet or a local area network to provide text-oriented interactive bidirectional communication facility using a virtual terminal connection.

Telnet client is not installed automatically on all linux distribution with a minimum installation.

Telnet has two different packages which are telnet client and telnet server package. If you do a “yum install telnet” it will only contain client telnet program.

This article explain how to install telnet client program and tested on various linux platform.

1. Issue the following commands to confirm that telnet is installed or not :

If telnet client does not installed, it should return something like :

4. If telnet client installed, it should return something like :

Microsoft Windows Vista, Windows Server 2008 and Windows 7 come with built in telnet client and server. But, It was disabled by default. To telnet the remote computer or network...

How to Install telnet on CentOS

Question : When i try to perform the troubleshooting using telnet command, the following error appeared. How to fix this ? [root@centos62 ~]# telnet localhost 25 -bash: telnet: command not...

File Transfer Protocol ( FTP ) is a file transfer protocol used in the network and computing systems. FTP service is very important to ensure the transfer of files can...

How to Install and Configure TigerVNC Server on CentOS 7.1 / RHEL 7.1 / Oracle Linux 7

How to Install wget, telnet, man Utility on CentOS 6.4

On minimal CentOS 6.4 installation, wget, man and telnet command utilities does not install automatically. Wget is a free network utility for linux to download files from the Web. Man...

Wget is a free network utility to download files from the Web using http and ftp, the two most widely used Internet protocols. Wget utility is available for free and...

How to Install ifconfig and netstat on RHEL 7.0/CentOS 7.0/Oracle Linux 7

Question : I have just setup on RHEL 7.0/CentOS 7.0/Oracle Linux 7 minimal server installation but i notice ifconfig and netstat command not found. How to make those command available...

I get the following error when I try to use SCP command line on CentOS linux server. SCP command is usually used to safely copy files and directories between the...