HTC has officially announced that the update OS for HTC aria on their website. This Firmware update require the phone connected to the internet.

Your phone will receive a notification of FOTA update when it is made available. Simply press OK to accept the update via a data connection such as Wi-Fi or GPRS/3G. After installing the update, you can confirm a successful update by confirming the Build number (From the Home Screen go to MENU> Settings> About Phone> Software Information> Build number). The new Build number after the update will be 2.37.708.5. Update: Android 2.2 and HTC Sense update. Note?Please back up your data first before upgrading your phone. We recommend using a free Wi-Fi hotspot or an unlimited data plan to apply this update. If not, standard data connection charges may apply. www.htc.com

There are also the blog post over the net has told that this update is not for HTC Aria AT&T user.

The HTC Aria is finally getting Android 2.2 and all its goodness, or at least it is in Southeast Asia. Sorry AT&T users of the Aria, they still haven’t determined when or whether they will push out an AT&T Froyo upgrade to ease the suffering. The Froyo upgrade as we know brings many nice features and improvements, one of which is overall battery life and performance, along with HTC Sense as well. www.talkandroid.com

The HTC Aria Android 2.2 update is beginning to roll out. Unfortunately it’s not for those of you on the AT&T [T] network in the US. Instead, the HTC support page in Southeast Asia mentions that Android 2.2 is being pushed out over in that region in the form of build 2.37.708.5.  www.gadgetvenue.com

Summary of Firmware Over The Air (FOTA) update as below picture. 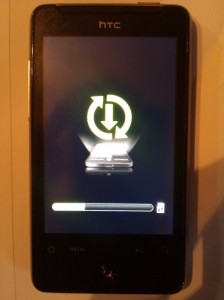