My first exposure to charitable crowdfunding was Matthew Inman’s (the Oatmeal)  campaign to finance his counter attack to a $20,000 lawsuit from FunnyJunk using the crowdfunding platform Indiegogo.    “I’m hoping,” writes Inman in his description of his project “that philanthropy trumps douchebaggery and greed.”  It seems it did.  He raised $220,024.  11 times his $20,000 goal.  What was his project?  This is the odd part  and his success was entirely dependent on the Gen Y zeitgeist of Indiegogo.  Was it inspired by a genuine social need or was he just venting his righteous indignation via the Internet?  His words, your call:

“Instead of mailing the owner of FunnyJunk the money, I’m going to send the above drawing of his mother. I’m going to try and raise $20,000 and instead send it to the National Wildlife Federation and the American Cancer Society.”

And when he finally received all those bundles of money he assembled them into the big “FU” he wanted to send FunnyJunk all along.

Look, you gotta love this guy, and he did raise money for two great charities, but was it charity? Or art? Or just revenge masked as charity or maybe something entirely new, “artevengity?”  What in the world exactly is it that Indiegogo did?  The money eventually wended its way to two big charities, even if it did take a little artistic detour on the way:  FU in money bundles. So, it was sort of a charity, even if an angry charity, and that made it Indiegogo material, not Kickstarter material.  Kickstarter simply does not provide a platform to fund charitable causes or organizations like National Wildlife Federation and American Cancer Society or even FU FunnyJunk.

After his first success Inman is now on to a more typical arts and culture project with Indiegogo: raise $850,000 to create the Tesla Museum in Shoreham, New York. And he is well on his way with close to $500,000 already raised and more than a month left in the campaign. The Tesla museum is not a charity, as Kickstarter might have defined it, since it is clearly a cultural project with an end goal, but the Tesla museum is significantly different  than his first project.   It is not artevengity.

The bullied bus monitor campaign, created by Max Siddorov,  is again artevengity and that is why it was so successful on Indiegogo and might not have been on Kickstarter.  Though this project had a clearly defined end goal, which Kickstarter requires, it was still too narrowly a charity.  The “Lets Give Karen-The Bus Monitor-H Klein A Vacation” had a target of $5000, but unbelievably raised $703,833 on Indiegogo!  That’s a vacation chalet in the Rockies.  It appears artevengity is a money magnet on Indiegogo.

When Oatmeal Inman was asked why he didn’t use Kickstarter, Inman wrote it’s because Kickstarter doesn’t fund charities and Indiegogo does. And anyway, he’d already had great success with Indiegogo.

RELATED:   Google Vs. Death: Has Google Finally Met Its Match?

So why use Kickstarter at all?  Indiegogo seems to do it all better.  Well hold on there, cash-poor cowboy. 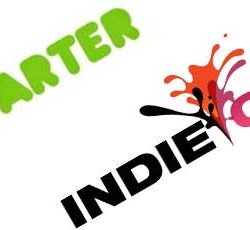 As pointed out by Patrick Hussy at the Guardian this week, Kickstarter has projected it will raise $150 million for the arts in America in 2013. That’s more money than the National Endowment for the Arts disperses in a year. No way around it: that’s amazing.  When you look at what sorts of projects Kickstarter funds it is easy to see how they do it.  This is art and culture funding, not Indie charity.  Kickstarter is the Big Dog on the block, which becomes stunningly clear when you look at their continuously updated stats page. They are so successful doing what they have been doing they even resisted changing their business model despite the new JOBS act.  In other words, Kickstarter is not heading toward equity crowdfunding anytime soon.  Madalyn Sklar has also posted a helpful comparative piece on this.

Now for the best news:  Kickstarter is an easy platform to fund your project. You heard right: Kickstarter will help you fund your artistic project no matter how inexperienced you are at self-financing or how small your project is. That does not mean you will necessarily succeed in raising your funding but if you have that new artistic enterprise, that totally awesome video game idea or knitted-bag line you want to fund, Kickstarter is a good first stop.  In their own words:

RELATED:   How Strong Should your Dedicated Server Be?

“Kickstarter is focused on creative projects. We’re a great way for artists, filmmakers, musicians, designers, writers, illustrators, explorers, curators, performers, and others to bring their projects, events, and dreams to life.”

And they do not claim any percentage of your Intellectual Property Rights!  What you fund is yours.  “Project creators keep 100% ownership of their work.”

When philosopher Arthur Danto first coined the term the “artworld” he never anticipated this.  He meant ‘real’ art is only what the art critics and institutional curators decide is real art.  Art only exists in the world of aestheticians and art snobs at wine and cheese parties.  For Danto, only the art intelligentsia really defined art since, after all, only they approve what gets into the galleries to begin with. And the well-heeled only funded new art based on the criticism of those self-impressed mighty aesthetes. Well, sorry Artie, no more.  Kickstarter does all that now.  Kickstarter lets your artistic ability to make something people are willing to finance determine your success.  To ensure better success, try giving your benefactors a free t-shirt, a mention in the rolling credits of your latest Zombie flick or a free sample handbag.  Kickstarter has now, by far, become the most powerful platform for financing art for art’s sake.  That’s artwold 2.0.

Crowdfunding is where most small businesses and small startups will likely go for funding by mid 2013, and odds are it will be the primary means of funding for small...

In their article, “Sci-Fi That Foretold The Future,”  Google’s Think Quarterly gives a list of science fiction films that have become, to some degree, a reality. More surprising than the...

131 years ago, Nietzsche stated: “God is dead.” But God is not dead. God–in any and all forms–is very much alive, especially online. Judging from online Presence alone, God  might...