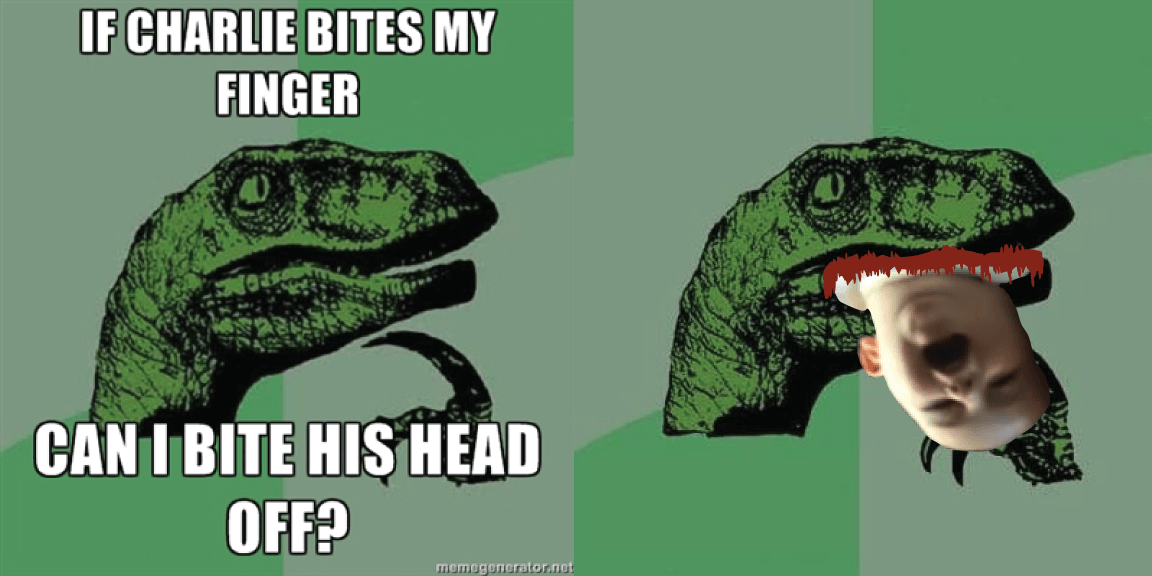 Eastwooding empty chairs, Women in binders,  now Horses and bayonets, “ermahgerd!” where is the chubby bubble girl  and why do bronies even exist?  Didn’t South Park already make the point?  Tebowing and cat breading are deadly. There are only three approved memes:  Peace signs, bunny ears and fake… well you know.

The question today is, can you use memes for profit?  Or is it safe to use memes to sell a product or even advance a political campaign?  In other words, is memevertising a good idea? Yes! But recognize the South Park warning: memes can be dangerous since, like all humor, they can backfire terribly if you do not know your audience or, worse, if you are an arrogant memetard who thinks he’s memeing but is just embarrassing himself and flagrantly insulting others.  Know your meme.

Someone on Obama’s campaign staff is a ninja master memer and If Obama wins this election it will be in part because his campaign has consistently managed memes better than the Romney campaign. Immediately after Clint Eastwood addressed the empty chair, Obama tweeted the back of a very large full chair with him in it and that helped drive the Eastwooding meme against the Republicans ever after. 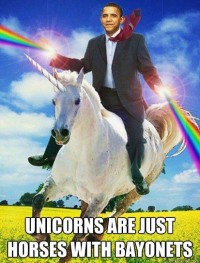 Team Barack knows when they are releasing the memes. Horses and bayonets became a meme against Team Mitt only minutes after Obama used the phrase. Team Mit, on the other hand, never seems prepared and has faced the Zerg Rush every time….”Kekeke”. (As a Republican, I really do hate Zerglings!) Team Barack has used memes intentionally to attack the ignorant in front of their faces… behind their backs.  It works because a meme is a secret handshake shared by millions. Team Mitt has been the oblivious kids at the dinner table as adults used r-rated innuendos over their heads.  “Unicorns are just horses with bayonets.”  Right. Obama speaks fluently to groups Romney scarcely knows exist. The point here is that memes are serious business–world-leader-election business–and it would be wise to learn something about them.

Now, imagine if your product became the most interesting product in the world  by hooking into a meme or, even better, because you created an effective meme. This idea is not new, it just works much faster now. The Smothers Brothers did it with their skit “Share a Little Tea with Goldie.”

“She was this housewifey, hippie-looking girl. Well, her name referred to pot [Kona gold]. She would always say, “Hi(gh),” and just giggle. One time she said, “It’s time for spring cleaning, ladies. Send me all those old roaches and sweep them up.” She would just laugh like she was stoned.”   I remember the episode vividly.  I knew exactly what it meant, but my parents had no idea at all what it meant. None.  “Roach” was a meme they didn’t understand. Suddenly I was smarter than my parents. I was in a club they didn’t even know existed.

So let’s figure out what a meme is.  Then next time, why they work and how to exploit the hell out them, which would be the best meme of all:  a meme about memes, a  meta-meme. 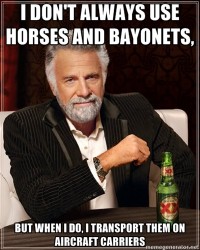 The word “meme” comes from “gene” to suggest that memories and behaviors are reproduced culturally like physical traits are reproduced genetically.  It was Dawkins’ attempt in “The Selfish Gene” to account for why biological evolution doesn’t extinguish cultural rituals that are not genetically beneficial.  In a word, weird unhelpful behaviour can be inherited through language and not genes.

Internet memes are ideas that reproduce wildly because people share them. They also mutate. So an internet meme is an internet artifact that reproduces very fast, changes and yet is distinct from other sorts of viral events. Their distinguishing trait is that Internet memes are rooted in parody, satire, comedy and humor. (I think there is a secret troll in every memer.)  Still, memes can be deadly serious.  Autocrats despise satirists. Ask Salman Rushdie.

Internet meming is a variety of insider humor that creates bonds within groups. Woody Allen and Chris Rock use this kind of humor. They make fun of their own heritage in a way only people of that heritage can. This also lets people without their heritage in on the joke, sort of a complimentary pass to Jewish and Black humor.  Similarly, when a large woman jokes about large women, it can be funny both to large and thin women because it creates bonds between all women who understand intimately the meaning of being a large woman. Women understand the implications of the forbidden three letter word in a way men do not and this creates a group bond.

RELATED:   The Release of the February 2011 Email Security Report

If a man jokes about “fat” women, though– FAIL!  Now the joke breaks bonds between people.  It pits large women against thin women and all women against men and even men with large wives against men with thin wives. But audience is everything. If a man tells a “fat” lady joke in front of men suddenly it can work because it creates a bond between a group of men who likely understand intimately the dangers men face by using the “F” word in front of women. FAT; OMG!

Memes work quite like this too.  Memes solidify groups by creating uninitiated outsiders.  We insiders know what the meme means and you outsiders don’t.  Even though we may be poking fun at ourselves, it still creates a tighter bond between all of us in the know. We know the code, you don’t.  Here is an example of a trending meme and an insider joke, check it out.  This is where we will begin our next installment on memvertising: 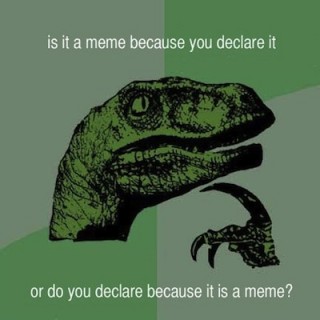 This is a meta meme.

Face mining is here.   Surreptitiously take a photo of her face with your Iphone and discover if she is orgasmic or faithful.  Scan his face and find out how...