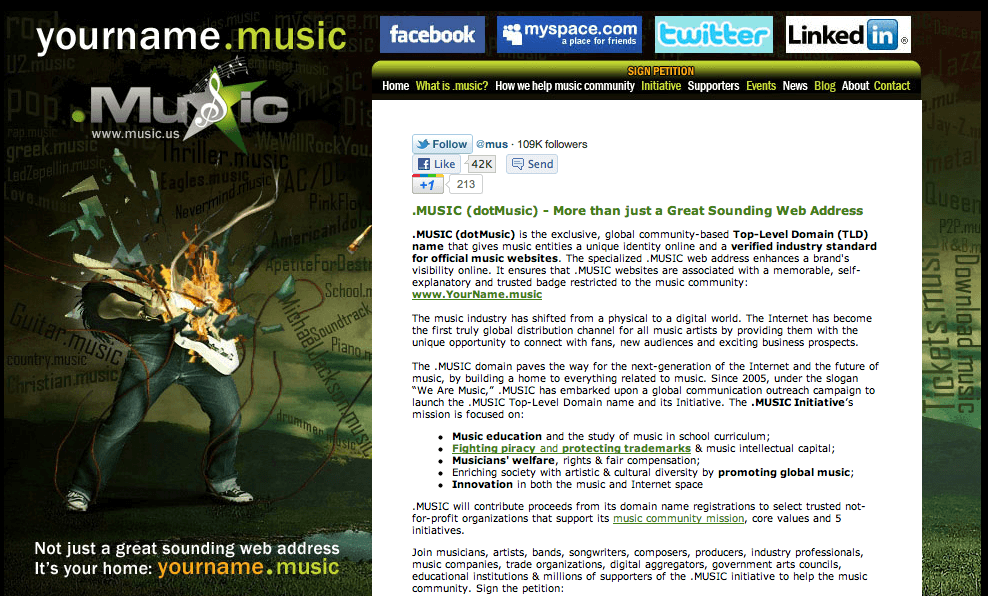 Critics continue to argue over the new domain name extensions that will be available in January 2012. The most recent battle is with the potential creation of the .music top-level domain name. The music industry recently announced their concerns with the new extension. However, instead of simply complaining online, the industry is bringing their concerns to the National Telecommunications and Information Administration (NTIA) which is part of the Department of Commerce.

ICANN is the current organization that administers the domain extensions process under contract from the NTIA. Therefore, any new regulations set by the NTIA must be followed by ICANN in the U.S. market.

RELATED:   Should You Register a .Tel Domain?

The new rules proposed by the music industry would require ICANN to document how the proposed extension has receive support from relevant stakeholders and can safely be supported by the global public interest prior to introducing new domain names. In early 2011, music industry groups such as the RIAA, ASCAP and A2IM sent a let to ICANN listing their concerns regarding the domain name change.

Initial Concerns of the Music Industry

Their main apprehension was the lack of direct control over who could register a .music extension. The industry does not want unlawful online music services to acquire a .music extension. Since the sharing of illegal music across the Internet is a current issue, an illegal website acquiring a .music domain name extension could significantly affect revenues within the industry.

This same group of advocates recently reiterated their trepidations to the NTIA to support the agency’s proposal to enforce stricter measures for the purchase of any new domain extension. The group released a statement informing the public that they do not feel as if ICANN has adequately address all concerns raised by relevant parties with regards to the sale and launch of new global top-level domains.

Awarding of the Domain Extensions

Also, the organizations want to be clear that they do not have an issue with the .music domain. Instead their concern is how the extensions are being awarded. The heart of the issue relates to who owns music online. There are many music companies that allegedly operate on the Internet outside the confines of the rules.

Small battles such as that with .music domain name extension are beginning to pop up across the globe as the launch of new top-level domains approaches. Hopefully ICANN can address all issues to ensure a streamlined launch.

How to Pick the Right Domain Name Extension

Choosing the right domain name extension is usually a very simple task for most people, as many webmasters tend to stick to .com domains, as they are the most popular....

What Type of Domain Will Best Serve my Online Endeavors?

Determining what kind of domain would best suit your business is usually an easy task if you decide to go ahead and purchase a .com domain like everyone else. However,...

“Free” is one of those misleading terms that gets thrown around quite a bit these days.  By the time you read the terms and conditions of the product or service...

So, you have finally decided that you want to make a name for yourself online. Before you even create the website, it is best to register a domain name first....

The internet industry is one that cannot be taught or learned in a short amount of time. The fact is that most of the people that set out to make...

Someone Registered My Domain – What Now?

Everybody is after domain names these days whether its for a website or just an email address to demonstrate credibility.  A domain name shows ownership, helping to prove that you...

Domain Names and Copyrights – What you Need to Know

Contrary to popular belief, copyright infringement is actually a relatively common practice that occurs everyday around the world. Online business owners put a lot of work into finding the right...

Domain Names for Your Small Business

The Internet is the ultimate gateway to the world of available sales and marketing.  Small business owners now have the same ability to compete with their larger competitors like never...