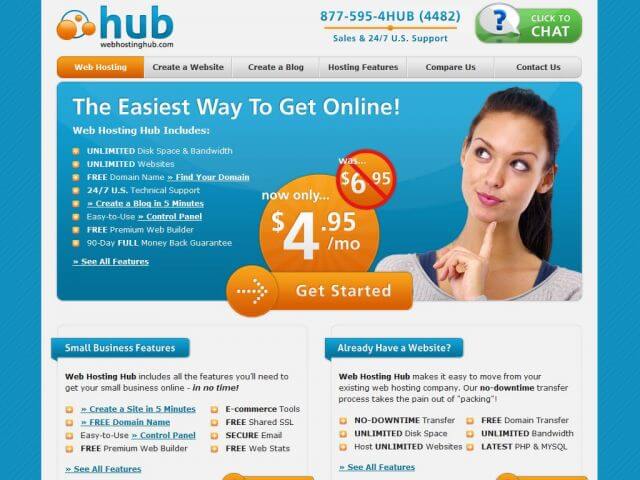 When it comes to cheap shared web hosting, fewer names get kicked around more than Web Hosting Hub. The provider has been providing dirt cheap hosting (typically just under $5 for a basic shared hosting plan, per month) for as long as we can remember, and during that time they’ve managed to earn themselves quite the reputations as a firm and solid member of the industry. However, just because the host claims to offer a full load of useful features and options to meet your needs, doesn’t always mean their services stack up in reality. So how’s a boy to know if the service is really as good as the promise? Simple! Just read our user-submitted reviews to see some first-hand experiences (and many, many problems) encountered with the web host.

However, we understand that you’re busy. Or, if you’re still looking for a great shared web hosting provider, likely somewhat stressed out. As such, we’ve compiled a few of the more common complaints and problems experience by our users with the web hosting company below. We’ve broken each of the complaint sections up by category for your easy perusal. But before we get into the nitty gritty details, why not have a hard look at some of the features Web Hosting Hub is offering first?

Who is Web Hosting Hub?

If you’ve been looking for a basic shared web hosting provider, it doesn’t get too much more stock than Web Hosting Hub. They offer all the basic features we expect from an host of this caliber, including a whole range of unlimited features and services. With them you’ll earn unlimited disc space, bandwidth, email accounts, and even MySQL servers. You’ll also gain access to an entire regimen of popular services and platforms, including blogging tools like Drupal and WordPress in addition to database utilities like Apache and Ajax. Best of all, their plans start at just under five bucks, clocking in at $4.95 a month for their lowest rate. They’ll even throw in $75 in free Google AdWords credits just to keep the smile going.

However, just because a web hosting company looks like a perfect pick hardly ever means it is the diamond in the rough you’ve been waiting for. With that in mind, we’re ready to dive right into the common complaints we’ve received from our users and readers, starting with one of the more important categories: Sales!

Slow Progress for the Non-Techy: According to our readers, the technical support offered by Web Hosting Hub is typically pretty great. However, we’re hearing less than thrilling reports about the promised “site built and hosted in five minutes” guarantee. According to our user reviews, all but the most tech-savvy of individuals will have an hard time getting their site just right, much less hosted, in a matter of hours—and most certainly not minutes! That being said, we are also hearing that tech support is always around, and is usually very helpful. So in this sense, it appears hosting a fresh site with Web Hosting Hub is both a curse and a blessing, though no matter how you slice it, a slow process.

Resource Issues: We’ve seen this complaint with several other shared hosting providers, but no matter how many times we run across it, the thing just doesn’t get any more comfortable. In typical shared hosting fashion, it appears that after the 3-month money back guarantee period has expired, our users are receiving emails notifying them that their sites are using too many resources. Then, they’re either being forced to pay extra for the so-called unusual use, or they’re having to live with reduced performance. This is never okay, and we’re truly saddened to see these reports emerging from Web Hosting Hub—especially with so many unlimited options being advertised!

Shoddy Refunds: This is another common complaint that we’ve seen across multiple shared hosts. As reported by our users, a total refund of the initial investment money with Web Hosting Hub can be hard to get. We’re hearing reports that users don’t receive their money back until up to several months later: If they ever see their money again at all. This is a troubling chain of events, especially as it completely defeats the purpose of a money-back guarantee in the first place.

Failure to Comply: On another note, it also appears that our users have had to harangue the technical support multiple times just to have a basic action performed. This seems to be the case most with website transfers, but either way, you should never have to ask a representative more than once to do something for you. We call this the one-time fix clause, and it’s done us well throughout the years.

Shoddy Website Building: Oddly enough, we haven’t received many complaints in this category. However, we have still been hearing reports that the site builder is a bit of a nightmare to finagle. We’re hearing that graphics and presets must be presented a certain way, or the website builder simply won’t accept them. Obviously this amount of hassle is a bit of a drag, and we’d certainly expected better things out of Web Hosting Hub.

Slow Website Transfer: This is another common complaint across multiple web hosts. Apparently, moving your website from either another Web Hosting Hub server or another web host can take quite a bit of time. We’re hearing reports that a basic website transfer can take as much as 30 hours to complete: A truly unpleasant number of hours, if you bank on your website daily for your own livelihood. Still, we’re not seeing quite as many reports as we usually do in this section, and believe it or not, Web Hosting Hub’s uptime appears to be some of the best in the business. Take that as it is, but always check our user reviews just in case!

Over the last month or so we have been meticulously counting up all the little complaints and problems you, our readers, have been experiencing with some of the largest names...

It is important for anyone who is a creator of a website to understand some of the most common mistakes that occur with web design. These mistakes, while common, can...

Choosing an e-commerce hosting plan can be extremely difficult for two reasons.  One is because there are so many options available to you.  The second is all the confusing terminology...

Modern web clients have many choices for their hosting company. Gone are the days when clients were limited to a few local hosts. Today, email and low-cost long distance access...

Regardless of the kind of web hosting service you are using, it is crucial that you receive adequate customer service.  You’ll need a support team standing by that is willing...

Web hosting providers come a dime a dozen but landing a good one isn’t always easy.  There are many choices out there and some overwhelm you with so much glamor...

Shared web hosting plans have long been renowned for being the cheapest type of web hosting available. However, many people don’t realize that this is not an entirely true statement,...

If you’re new to the world of web hosting, you may find yourself swamped with endless lists of terminology that sound like Greek to your fresh ears. Website hosting, like...

A Look at Common Cloud Hosting Lingo, Part One

If you haven’t heard about cloud computing yet, God bless you: We haven’t a clue how you missed out on the barrage of hip new trends, but we sure are...