Technology moves fast. Sometimes it’s faster than we can comprehend, so, to help you find the latest and greatest, here’s a roundup of some of the newest technology, from apps, to software, to web sites and everything else that enters our digital lives. Here’s some hot news…

QR Codes are hot and here to stay. Those little black and white crossword puzzle-like boxes you scan through your smart phone take you to a web page, send information, register users and even place calls automatically. They appear on most packaging, ads, posters and, with savvy companies, on their roofs and the sides of their businesses for anyone to scan. QR Codes are even showing up on cemetery headstones.

As with anything, someone decided to improve upon the product and designed QR codes started popping up. Originally QR codes were developed by the Denso Corporation of Japan (a subsidiary of Toyota) but they didn’t patent the invention so anyone could create and use them (altruistic for a corporation, indeed!).

The twists and turns of the little black squares, as with a barcode, has a unique imprint, recognizable to scanners or readers but there is a 30% correction allowance, so a third of the code can be discarded and replaced with images, type or anything you can imagine. Patrick Donnelly, owner and creative whiz of QR Arts, was one of the leaders in QR design.

Other design firms started to handle QR design and it certainly looked like the wave of the future and a guaranteed bright future at that. Well, one improvement deserves another and sure enough as technology advances, so did the creation of software not only to create your own code for free within seconds but now there are sites with software that will create designed codes in seconds.

Uriel Peled, is the Co-Founder at www.eyeconit.com, a startup dealing with image recognition technologies for the QR Code market that developed tech to turn any design into a QR Code in a simple and fully automated click. 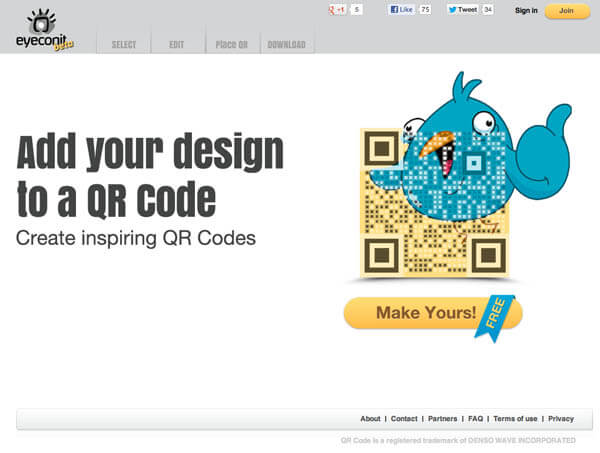 Eyeconit was the company that also created the app that allows you to download other apps by merely scanning the icon. According to the description on iTunes, “Get apps by pointing eyeconit at any app icon from another friend’s iPhone, iPad or iPod, or from any internet site or magazine and get a link to download it from the AppStore.”

Watch this company for great things!

RELATED:   HealthCare.gov the Second Time Around: Will the Website Handle the Traffic This Time?

QR Hacker is another new site that “pimps” your QR code with a little input and a few clicks. 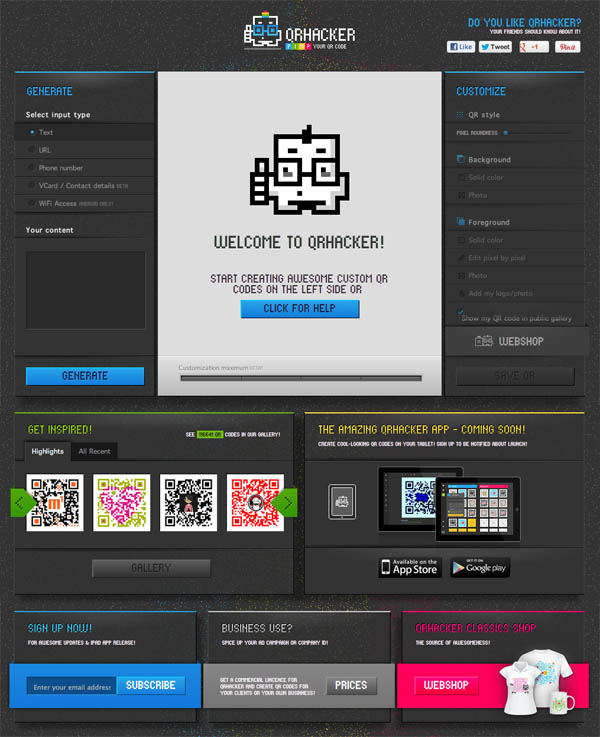 When I first saw this new site, my first thought was, “who needs a site to transfer the copyright of creative work done for a client? A contract takes care of that!”

Then reality gave me a gentle slap in the face as I read more horror stories from creatives who failed to get signed contracts from clients and also didn’t get paid. So, I took a closer look at https://www.kunvay.com/ (click on “play video”). 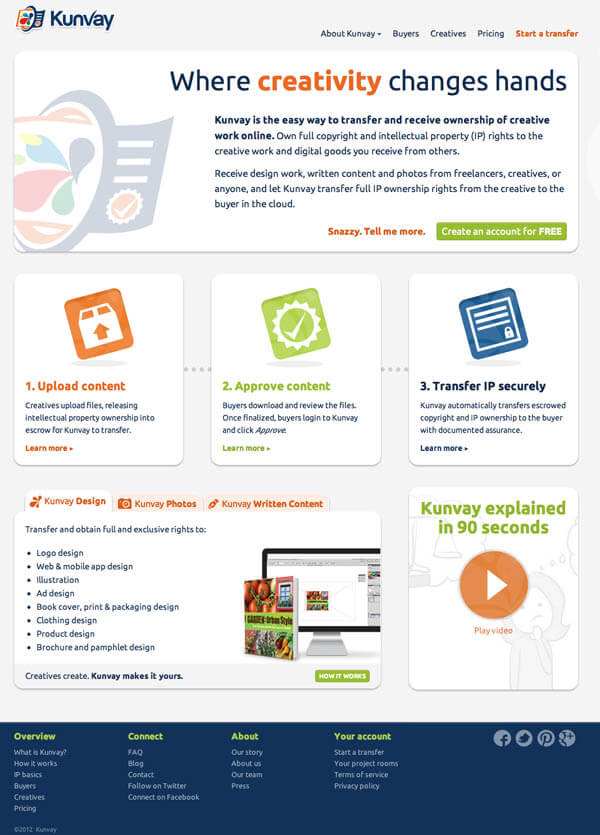 I asked Founder, Reggie Solomon, for a little personal explanation of the benefits of Kunvay. He was happy to oblige:

So the great thing about Kunvay is that it can be used to compliment contracting or as a service in lieu of contracting. As many freelancers know, having a contract doesn’t mean you get paid – but it sure does help. Many clients care about when they will receive work, and how much they’re going to pay for it.  Many freelancers are concerned about when they’ll get paid, and how quickly they can produce the work for the clients. The issue of intellectual property ownership doesn’t always get addressed in contracts.

Kunvay can be used along side contracting as a tool to deliver intellectual property to clients and as a stick for creatives and freelancers who can withhold IP transfer and remind non-paying clients that until they’ve paid their invoice, that the creative still owns the creative property and may be entitled to profits resulting from their client’s active use of their property until they are paid.

Kunvay also helps creatives and freelancers by making it easy to handle small jobs.  Contracting is a pain.  If you’re making a $250 logo for a client, you really don’t want to have to go through all the contracting and paperwork to ensure your client gets full ownership of what they receive – but it’s an important step. Kunvay is an ideal tool for handling small jobs and is powerful enough to handle the transfer of intellectual property of up to $10,000.  We make it dead simple for creativity to change hands helping both creatives and clients.

In my many years of experience, I have to admit that I like the notion of this site and its purpose. Acting somewhat as middleman, between parties who may not understand the ins and outs of the copyright law or that on-time payments are important to the livelihood of independent vendors as well as the legal assurances a growing company must have, the idea seems to be filling a long needed gap in the professional relationship between both vendor and client, even with a signed contract, the small fee (charged to the buyer) is well worth the legal backup provided by Kunvay to head off any problems that may lay in wait down the road, caused by either party, as can happen. 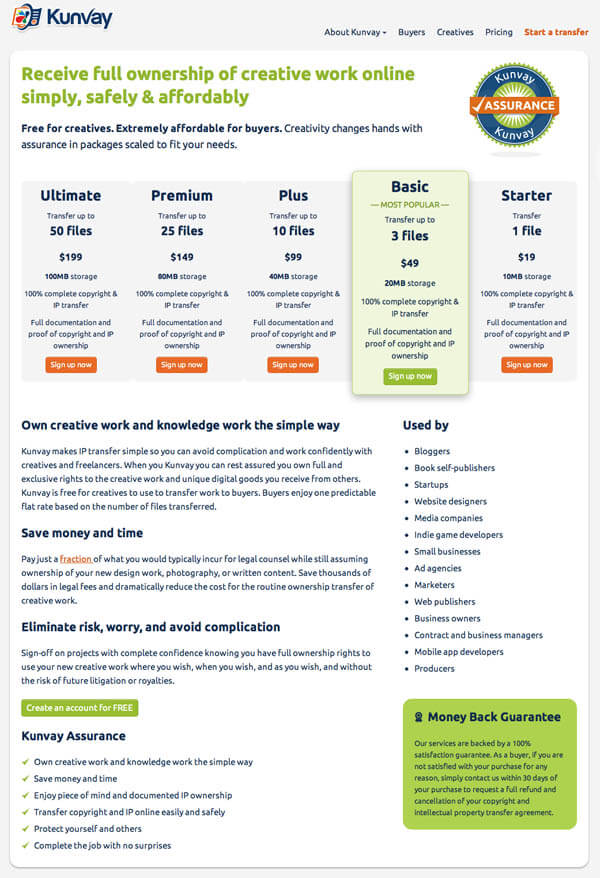 *Note: A copyright can only be transferred by the creator/owner by written consent. All deadlines and payments, along with other considerations should be worked out before a job progresses and agreed upon, in writing, between both the vendor and the client.

Retina Tracking: Marketing Through Your Eyes

Retina tracking has been used in testing for a while now but only in labs where a test subject is viewing a TV monitor while their eye movement and focus is tracked to see where they are looking. While watching advertisements, are they looking directly at the product, the spokesperson, the spokesperson’s crotch or chest? It’s a preliminary A/B testing without releasing any material without assurances that the visual has maximum impact for viewer attention.

The problem is, viewer attention for TV commercials is lost when the consumer is in the store and confronted with other choices. Retina tracking takes the same technology and applies it to shoppers in a live environment.

According to Emily Glazer, in her article, The Eyes Have It: Marketers Now Track Shoppers’ Retinas, appearing in the Wall Street Journal:

Consumer-products companies are turning to new technology to overcome the biggest obstacle to learning what shoppers really think: what the shoppers say. It turns out consumers aren’t a very reliable source of information about their own preferences. Academic research has shown focus-group subjects try to please their testers and overestimate their interest in products, making it hard to get a read on what works. But getting testing right is crucial for consumer-products companies because they ship high volumes and lack direct contact with shoppers.

As relayed in the article:

“There’s often a big disconnect between what people want to do and what they say they want to do,” says Steve Posavac, a professor of marketing at Vanderbilt University. “Any attitude,” he says, “becomes more extreme” in research studies. A retina-tracking camera embedded in the rim of a computer screen and attached to special glasses or free standing typically costs $25,000 to $40,000, according to Michel Wedel, professor of consumer science at the University of Maryland’s Robert H. Smith School of Business. The information it collects can be used to form a “heat map” that uses color to show where people looked on a simulated shelf.

This is very true and, as poets have written over the centuries, the eyes are the window to the soul, blah, blah.

Watch a video on this subject.

So, how do you test your web site if you can’t afford this kind of testing? The first method is to design it with basic layout principles (people reading left to right, up to down) and if you wonder why something isn’t working, try A/B testing!

Are you introducing new software or a site that is noteworthy? Drop me a message and let me know what’s going on. Email Speider @ speiderschneider@gmail.com