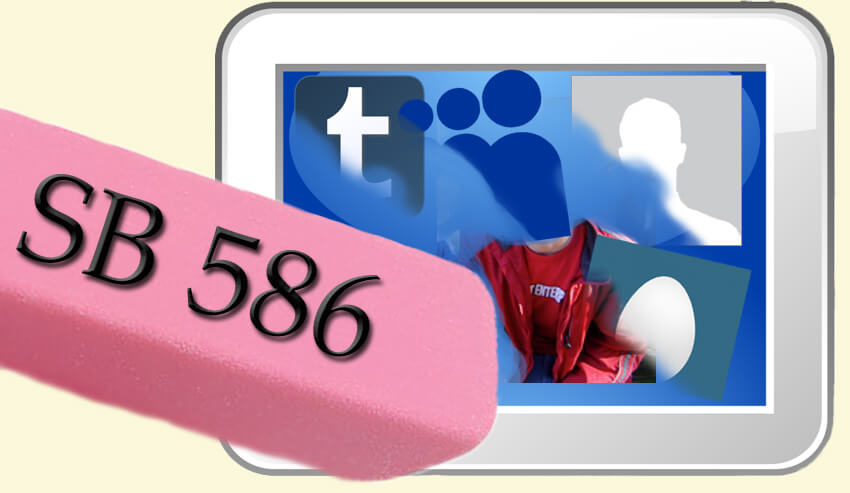 If I were making investments, I’d invest heavily in tattoo removal. No one has figured out a perfect removal process, but when someone does it will make millions. And robotexting: when is someone going to invent a robotexting app that will text my wife/mother/brother so I don’t have to? “Sure, Honey! I’d be happy to run to the store for you. Txt me the list.” I don’t have time to be polite via text: robotexting better get here soon before my relationships fall apart. Digital erasers? Now there’s an investment: every kid growing up five years ago to now and far into the future is going to need one when they start applying for jobs or graduate school. What lucky programmer is going to write the code that will crawl the entire Internet, deleting embarrassing content for 20-somethings who were imprudent teens? That software will easily make millions, maybe even billions….

Digital erasers weren’t even a thought in people’s minds until the absolute folly and imprudence of youth appeared drunken, sometimes illegal and certainly offensive in places like Facebook, Twitter and every social media outlet teens frequent. It used to be when you were young and acted stupid, it didn’t go beyond your local town, neighborhood or school district. If you got an unsavory reputation, the problem could be solved by moving away, thus wiping the slate clean. Very few of us have unsullied memories of our teen years: what are the teenage years for anyway, if not for carousing, rebelling and testing limits?

But what if all the folly of your youth followed you into your job search? Studies show that 91% of employers use social networking sites to screen potential employees. What if it showed up on your applications for graduate school or housing? Online indiscretions and bad reputations are not easy to shake—certainly not as easy to leave behind as an offline and physically, not electronically, situated troubled teenage period.

Whatever! It’s apparent that no matter how many teens ruin their reputations (or get arrested!) by posting drunken/nude/foolish photos of themselves on the Internet, others do not take warning or see any cause for caution.

By Alton via Wikimedia Commons

Understanding this problem, California enacted the Digital Eraser Law (SB 586) in September. It’s a nice effort, with a noble goal: to protect minors by prohibiting online merchants of adult-only goods from advertising to minors and by making it mandatory for any “Internet Web site, online service, online application, or mobile application” containing a minor’s information to remove that information at the request of the minor or any third party. In regular language, that means children in California have a right to delete any information they have published on the Internet, the right to digitally erase any content they have created as children.

Great idea, California, but practically impossible to pull off.  “Embarrassing photos spread virally, and internet archives automatically create copies of nearly every piece of information on the web,” TechCrunch reminds us. This is problem #1: even though teens have the right to erase content on sites where they originally posted the content, they may not know how many copies of the content exist on other sites.

“From my reading, the second someone reposts anything you share, you lose control of it,” the Daily Mail reminds us. Once a picture is re-posted on another site, the person who originally posted it is not the only owner of the information and therefore cannot delete it. SnapChat is a popular app with teens and the assumption is that pictures sent via SnapChat disappear, but in reality those pictures can be captured by the receiver and live on forever once re-posted on the Internet. The illusion of protection via automatic picture deletion is just that: an illusion.

Education about the reach of online posts and information is another problem: teens and children have limited, if any, knowledge of copyright and certainly don’t imagine the ways in which their information/posts can be re-posted and used by people unknown to them. Privacy settings? Why should they care?

According to one study by the Pew Research Center, of the teens active online:

So they do care…enough to remove some content. Critics of the Digital Eraser Law (SB 586) have suggested that it could backfire by reinforcing bad habits and removing the consequences of bad choices and actions. How will children learn from their mistakes if they are guaranteed erasure of them when they turn 18? Will teens assume that they can magically clean up their online reputations when they reach the age of adulthood so feel they have no reason to curb their behavior online?

The digital eraser idea is a great one–golden!–but the fact is, it doesn’t work. Not yet. Deleting yourself from the internet is still harder than you imagine. The million dollar idea is not just that teens need a digital eraser: adults need help managing their reputations online, too. Especially famous adults. Politicians and celebrities make mistakes on Twitter and social media, but online reputations are also ruined by gossipy bloggers and comment trolls. X-pire, released by German software designers, is a new “digital eraser” software that will delete pictures after a specified amount of time, but this requires foresight and only deletes the pictures where they were first posted: it doesn’t crawl the Internet to find re-posts and wouldn’t be effective if you haven’t put it in place before posting. And, let’s be honest, if we all thought about it before we posted something unwise online, we probably wouldn’t post it.

For now, those with heavily damaged online reputations attempt to trick search engines with the help of “Online Reputation Managers“:  paid technologists who make it their job to manage, maintain and salvage people’s Internet lives.  Julia Allison, former dating columnist for Time Out New York magazine whose reputation was damaged by unsavory posts and pictures on Gawker, “compares the scar to her online reputation to a large tattoo: ‘Technically, it’s possible to remove it, but it’s painful and expensive. Plus, there’s no guarantee that you’ll ever remove it 100 percent.’”  The ill-advised tattoo and the offhand, offensive Facebook post bear striking similarities: each functions as a rite of passage with painful consequences. The removal tools for both remain ineffective and yet give a false sense of security.

Looking for your next million? Tattoo removal and digital eraser software. You heard it here first!

Can Printed Money Be Replaced by Digital Payments?

Digital payments are quickly becoming widely accepted. A recent report by Juniper Research suggests digital payments will increase by $2.2 trillion over the next five years. The results of the...

How to Make Money with Web Hosting

We all know that the basis of all web sites is web hosting. What benefits does web hosting have?

Digital Realty Trust Inc. took home the “Innovation in an Outsourced Environment” award at the Datacentre Leader’s 2008 Awards.  The firm received the honor for the Turn-Key Datacentre it recently...

Money-Saving Innovations For the Small Businesses

If you are running a small business and you are really tight on your budget, there are many innovations that can help you save money. Of course, there is the...

In today’s economy, every business needs a website, and every website needs to be hosted somewhere. Web hosting is one of the most important parts of owning a business website,...