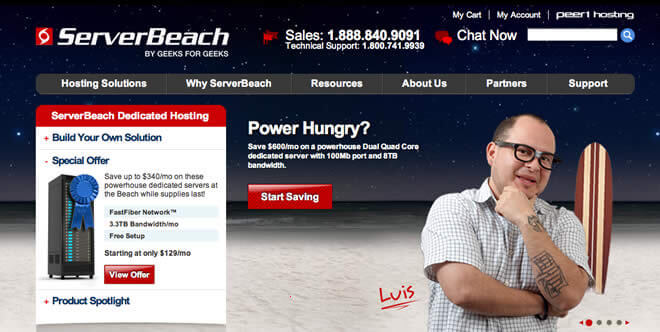 The General Manager of ServerBeach released a statement informing the public that many smaller clients had been requesting “do-it-yourself virtualization” and utilize a group of servers however they need. Common uses include running websites or specific applications, backing or storing content or utilizing it for security purposes.

The Problem with Hosting

Customers were aware of the components of the equipment; the company previously did not allow them to open it up in the manner they wanted. However, with the new service, the equipment is open and customers can do exactly what they need to do. Clients have a choice between the Citrix ZenServer or Microsoft Hyper-V hypervisor. Both servers give administrators a centralized control panel to allocate specific services to dedicated servers.

RELATED:   The In’s and Out’s of Virtual Private Server Hosting

As a division of Peer 1 Hosting, ServerBeach targets small-to-mid-sized businesses that have the knowledge and experience to be the system’s administrator of their own servers. These new tools of advanced virtualization will allow information technology professionals to improve management and allow for more cost-effective initiatives.

The goal for this new infrastructure is to extend the company’s reach and increase growth within the market. Simultaneously this will escalate competitive pressure on other local and international web hosting providers. In the web hosting industry it typically only takes one innovative idea to spark a slew of changes.

Showcasing the Significance of Virtualization

Since each hosting provider has shifted toward virtualization, this expanded service will showcase the significance of the practice. It is more than likely similar news from other web hosting providers will be announced in the near future.

Virtualization of resources has become a popular new hosting type due to its cost-effectiveness and performance capabilities. The new do-it-yourself service takes the basic idea and expands it to allow customers to basically do whatever they want on the server. Many businesses are limited to unlocking the complete functionality they need from a server. However, ServerBeach’s new product will now allow customers to utilize exactly what they require.

How Secure is Virtualization Technology?

A September 2009 survey released by Centrify revealed that the major barrier facing 46% of the respondents when it comes to adopting virtualization is security. In fact, only an estimated...

It is often said that a VPS (virtual private server) is the perfect compromise between a shared and dedicated server.  However, what many don’t understand is the technical challenges involved...

Virtual Private Server or VPS, refers to a type of hosting where different customers host their sites a single physical server. They share the same internet connection and even the...

The great demand for more secure, reliable services has made virtualization technology increasingly popular in the web hosting industry.  While many customers are not ready to handle the costs and...

The In’s and Out’s of Virtual Private Server Hosting