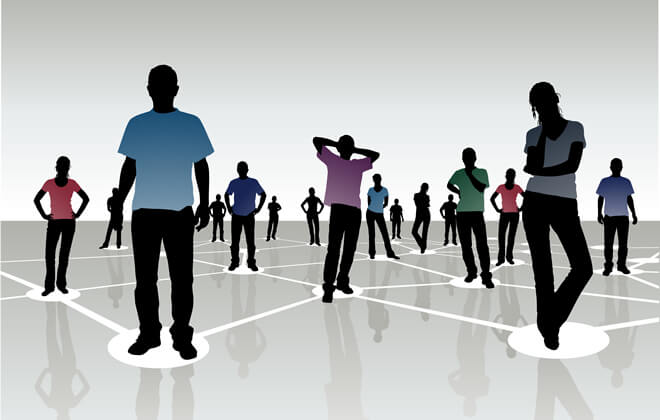 Facebook, Twitter, and probably soon Google+, get most of the analysis of the social networking world.  With that comes most of the attention of advertisers.  This is the billion-user World Wide Web, though.  For every bar that all the cool kids are hanging out at, there are plenty of local bars near them with people spending money the same as anyone else.

These local hangouts, though, can often be a little less friendly to marketing sharks.  Let’s face it, too: you’re not interested in being one.  You just want to advertise your services to people who might honestly be interested.  Even the local dives have ads posted in them.  To do so simply requires that you understand the scene, and treat it with respect.

So let’s drop the metaphor and look at some of the smaller but still popular social networking sites.  For our purposes we are going to focus on native English sites that mostly have at least 1 million users.  If you can speak other languages then there are many very large ones that represent good alternate markets.

CafeMom has been growing tremendously, and is on the verge of breaking through “niche” status to become one of the web’s bigger players.  An outgrowth of ClubMom, this social networking site panders to the moms who need an outlet that they can share with other moms (men are specifically barred from registering).  General socializing happens here, but also advice and support for just about every mothering need out there.

What the advertiser should know: CafeMom is very advertiser friendly.  If you are offering a physical product of some kind, you should consider sending free samples: this is one of the draws the site uses to get people to register.  Remember that the goal of this site is to make the lives of the mothers there easier.  Make sure that whatever you are advertising is geared towards that, even if indirectly.

RELATED:   E-commerce and Social Media: No Longer Oil and Water

It’s a sign of how huge the World Wide Web has become that a site with 14 million users is considered 2nd-tier.  Care2 hasn’t rushed to growth, but has been slowly building their user base since 1998.  The reason is that this is not a site that puts profits first.  Care2 is a social networking site for activists.  It allows individuals to work with each other, discuss issues, and most importantly find concrete ways to channel their energies into effective social change.

What the advertiser should know: Care2 takes their commitment to social values seriously.  This includes their approach to advertisements.  They have on their site a long explanation of what their advertising principles are.  Read it.  Make sure you can convince them that you will enhance their site, not just draw from it. One minor marketing addendum: according to the site’s founder, Care2’s user base is also mostly female.

If you measure the success of a web site by how well it fulfills the Web’s potential of bringing disparate people together, this is about as successful as it gets.  Link Expats is a place for people who are removed from their home country for any reason to find each other, talk, and assist each other.

What the advertiser should know: While some of the reasons that someone would be a member of this site are benign, some are (literally) deadly serious.  This site as a result has strong privacy protections.  Users can’t even friend each other, but they can ban one another easily for spamming.  Get the idea?  Follow the site’s rules to a T, and don’t push.

RELATED:   To Blog or Not to Blog?

deviantART is one of the longest running and best supported amateur artist social networking sites in existence.  Just about every type of 2D art is represented, and with 14 million members, just about every demographic is represented.  There isn’t that much in the way of large communal spaces: chat rooms are the only thing this site has that fulfills that function.  Most of the interaction occurs on the pages of artists and their works.

What the advertiser should know: Ads are only visible to users who don’t upgrade to premium memberships.  That doesn’t look to be a small demographic on this site any time soon, though (reference the term “starving artist”).  In fact, it’s large enough that you can almost treat this like a “normal” demographic distribution of users, albeit one with a bit of geeky edge to it.  Anything either tech-oriented or counterculture-leaning should find an audience here.

You might have used this site before and not realized it.  Stickam is one of the premier media sharing sites on the web, with a particular focus on streaming video.  Because the demand for this kind of service is quickly growing, and because they make embedding easy, Stickam winds up often quietly embedded in other web sites.  If a site you use has recently addedy a video chat room, check the credits: it’s possibly a Stickam room.

What the advertiser should know: Stickam has worked heavily with major media kings like MTV and CBS Radio.  This gives it a bit of a MySpace feel: if you know the kind of demographic that comparison brings to mind, then you know about what to expect.  If you don’t, we’ll sum it up: a culturally diverse group of mostly beginner to intermediate web users (this is a broad stroke: please don’t take offense Stickam wizards) who probably are used to seeing web advertising.  This is with one catch: many chat rooms are adult-oriented.  Be sure you’re OK with this.

RELATED:   Is Your Web Site Complete for Customers?

It may seem like we’re just fulfilling some editorial requirement of including one “strange” site by closing with these guys.  This isn’t so much that case.  It’s more to hammer home the point that sometimes you are dealing with a very specific subculture, and you need to know how to approach them with respect.

VF servers the “Gothic Industrial Culture”.  If you don’t know what this is then it’s hard to describe it without resorting to obnoxious stereotypes.  Consider it those who like to “play in the dark”, in just about every meaning that this phrase might bring to mind.  The name itself is likely a “scaring the normal” point of pride jab.  If this description in any way weird you out, you should probably look elsewhere.

What the advertiser should know: This is a very self-aware demographic.  Thus it’s best to neither approach them with a typical suit-and-tie motif nor try to pretend you’re a part of this crowd, assuming you’re not.  Despite the very showy appearance of this crowd, believe it when we say that they’ll respect you the more real you are.

E-commerce and Social Media: No Longer Oil and Water

Once upon a time, there was a hard and loudly enforced social rule on the internet: there were places to hang out and places to shop, and never the twain...

A Review of Social Commerce Trends

Aggregate Markets teamed up with Webtrends to develop and publish a study that examined the effect social networking and mobile sites have on regular website traffic as well as the...