The great thing about technology is there will always be news about innovations and wacky mistakes that make you wonder if smart phones are smarter than their owners. Some of the news makes you wonder if we’ve surpassed the technology we saw in the Jetsons cartoons and other bits and pieces, no matter how amazing, will make you yawn as you shrug and think, what took them so long?

Tesla Has the Last Laugh with eCoupler

Nicola Tesla was a genius, way ahead of his time. He was so brilliant and his inventions were so mind-boggling that Thomas Edison jealously ran a smear campaign to discredit Tesla in the public eye while Edison stole inventions right out of the U.S. Patent Office. Tesla was too smart for Edison, so he had to drive him beyond the edge of madness.

Maybe it’s just that so much genius drives these men and women to madness. Maybe the brain overloads and different people react in different ways — some with helpless insanity and others with evil insanity.

One of Tesla’s creations, aside from alternating current, which competed against Edison’s Direct Current, was the Tesla Tower. It was a method of sending wireless energy and had it been given a chance, we would be a world without power wires.

eCoupler uses wireless technology for several power usages. The results will blow your mind because you’ve probably used the products before but never thought of the applications. Watch this video…

In the video, they talk about printable wiring. That is known as T-Ink. Personally, I’ve worked with T-Ink back in 2007 when it was first introduced to the market and the applications were mind-boggling. The cereal boxes that seem to light up are thermal inks that “electrify” when they receive an electrical charge. It can power sound for packaging that speaks to the consumer, type that will appear and disappear, clothing, plastic, glass, metal and concrete (imagine roadways with changing information for drivers or the end of scenery-destroying billboards).

Aside from the green technology (no wiring), the combination of the T-Ink and eCoupler technologies lead to many uses you will see on the market and can apply to your products and marketing… like this next item…

Hate making shopping lists? Hate running out of something because you didn’t remember to put it on the shopping list? The aforementioned inventory capabilities outlined in the eCoupler video are present in this unique item…

2013 is almost here, judging by the Christmas items now being stocked on store shelves across the country and with the new year we’ll be seeing new technologies integrate into our lives through products every day.

The recent passing of Apollo 11 astronaut, Neil Armstrong (Neil Young as NBC.com so wrongly put it but got the news on Snooki’s baby correct) reminds us that the computer systems that made it possible to go to the moon are not as powerful as the computer systems in our cell phones (New NASA Satellites Have Android Smartphones for Brains) and cars (I’ve driven my car over 250,00 miles, which is at least a trip to the moon but will people remember me?). True, it’s been 43 years since the moon landing, or the fake moon landing, depending on your beliefs, but technology changes faster than ever and every year now is equal to ten, twenty and even thirty years during the last century. Do you remember life before ATMs, remote controlled cable TV, HDTV, Xbox, Wii, android phones or even Facebook? By 2014, you will have forgotten about other every day things you now take for granted.

RELATED:   IT Pro: Missing Pieces in the Human Element 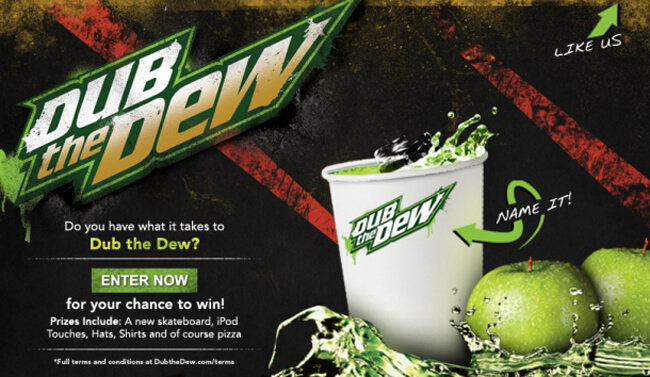 Is your web site really secure? Do you moderate your social media? The folks at PepsiCo learn a very hard lesson about the web recently with their “Dub the Dew” campaign.

Opening a “name-the-flavor” contest for their new green apple flavor must have seemed like an easy marketing coup but the soda jerks forgot that they were dealing with the opinion of the masses — the same people who exiled rapper Pitbull to a Walmart in Alaska. As should have been expected by any marketing executive who knows the web, the results of “Dub the Dew” were so offensive and, in the end, useless, that the entire promotion needed to be shut down.

There are accusations of hijacking and other finger-pointing but the truth is, only those who ran the contest are to blame for not moderating entries before they were posted.

As people voted suggestions into the top ten, the number one favorite was the thirst quenching name, “Hitler did nothing wrong.” Other names that probably won’t be used include, “Diabeetus,” “Moist Nugget,” “Cumsplosion,” “Gushing Granny” and “Fapple,” which was the cleanest of the lot! 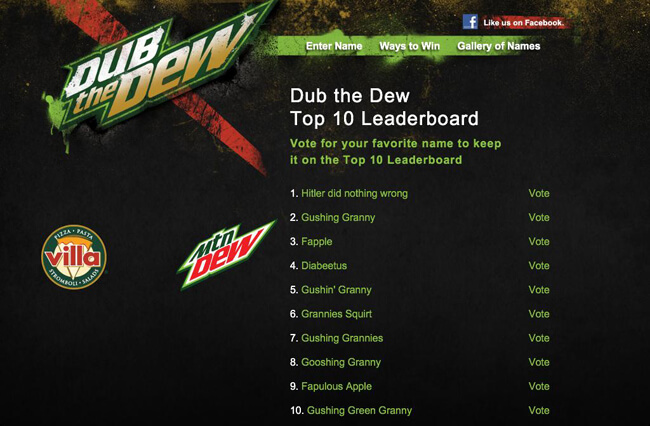 To add even more hilarity, at least in some people’s minds, pranksters even went so far as to hack into the site, adding a banner that read “Mtn Dew salutes the Israeli Mossad for demolishing 3 towers on 9/11!” and a pop-up message that resulted in an unwanted RickRolling.

Mountain Dew released the following message regarding the unfortunate incident:

“Dub the Dew,” a local market promotional campaign that was created by one of our customers — not Mountain Dew — was compromised. We are working diligently with our customer’s team to remove all offensive content that was posted and putting measures in place to ensure this doesn’t happen again.  Mountain Dew has a legacy of engaging its most loyal fans to tap innovative ideas for the brand through really successful programs like “DEWMocracy” and “Your Malt Dew” and so we sincerely apologize to all of our fans who may have been offended by this customer’s program.

Too little, too late. “Dub the Dew” has entered history as one of the biggest blunders in marketing and, thanks to the web, it will stay there for eternity, surfacing every now and then, followed by the firing of some marketing person. Next time. Perhaps it’s better to leave the naming, as well as where someone will appear in person, is better left in the office conference room?

RELATED:   Mobile Sites and SMS Marketing: Are You Ready?

One has to wonder if the pranksters will launch a lawsuit to have Mountain Dew honor the terms of the contest and have to produce a flavor named… well, that really awful one.

“Fred Durst Society of the Humanities and Arts” is Frontrunner for Renamed Austin Waste Management Department.

In the last iTech Review, I spotlighted a startup dealing with image recognition technologies for the QR Code market that developed tech to turn any design into a QR Code in a simple and fully automated click. They have updated their site and included some great examples of how people are using their app for creating designed QR codes. Check out the new site!