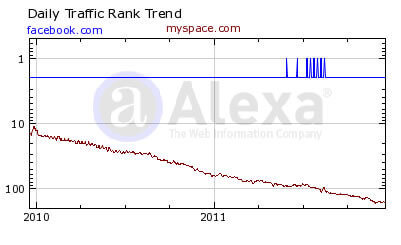 At first, social networking was an idea that many people had never heard of. When MySpace hit the scene, it became popular in a dramatically short amount of time. There were so many things that you could do on the site that were the catalyst for its primary success. Facebook, on the other hand, started off small when it first came out but, like a planted tree, it has grown and expanded into something amazing. As Facebook continued to grow, it began to outshine MySpace and is now ranked higher than MySpace. There are a lot of differences between the two sites right now as both sites have different features to offer their users.

Both social networking websites have applications that users can play and have fun with. As of right now, it seems Facebook takes the lead with some of its applications. For example, the game Farm Town has received so many users and a lot of people find the game to be addicting.

Facebook may win the race when it comes to demographics. The fact of the matter is both adults and children or teenagers own Facebook accounts. It is a cool website to use for people of all ages. On the other hand, a lot of the users on MySpace are younger. When Facebook was first designed, it was aimed toward college students. MySpace still has that spunky appeal that attracts younger visitors while Facebook seems to have a more mature layout that is easily and openly used by both adults and teens alike.

RELATED:   Into 2014: The Social Media You Really Need

When it comes to privacy, MySpace definitely takes the lead. The news is constantly bashing Facebook for violating the privacy of its users. Facebook can show other people exactly what you do, every move you make. It can also show what type of habits you have when you browse the web. Advertisers also use the information on your Facebook page to target you with advertisements which, let’s face it, can be quite annoying! Myspace offers a better sense of privacy all together.

MySpace takes the lead for design as well. While designing your own page is not important to some, MySpace allows its users to design their profile in a unique manner that helps their page stand out from other pages. Facebook, on the other hand, sticks to a simple layout that cannot really be altered, changed or customized according to your preferences. With that said, the latest version of Facebook, slated to roll out in the coming weeks, is said to minim the design of MySpace in many ways, which truly heats up the batter between these two social networking juggernauts.

Both MySpace and Facebook are perfect for entertainment purposes. You can listen to music, play games, and of course, stay in touch with your family and friends.

RELATED:   Video Streaming Beyond YouTube – They Really do Exist!

Both of these social networking websites are perfect for entrepreneurs and artists who are looking to promote themselves or their business. Some find it easier to network on Facebook while other people say it is easier to network on MySpace. One really has to try both and see what works best for them.

As a member of MySpace, you may notice a bunch of junk e-mail in your messages. This can be quite annoying. When it comes to spam, Facebook is better at filtering through it so that you are not bothered by it as much.

Very recently, there has been a lot of Facebook hacking taking place. However, this can happen with a lot of different websites and the best way to save your Facebook or even MySpace page from getting hacked is to change your password every now and then. When it comes to your safety and security, MySpace is better with providing you with the security you need to prevent your personal page from getting hacked or from your private information being exploited.

When Facebook first hit the scene, it was simple to use. Now, they have changed so much when it comes to the format of their page, it can be very frustrating, especially for older users who were just getting the hang of the old Facebook.

MySpace has changed its layout and theme over the years but it is still fairly simple to use.  As of right now, Facebook even rolled out a new feature which is referred to as “The Timeline” and basically outlines your life from birth until now with pictures and everything else that is important and significant to you on your timeline.

With the differences between the two social networking websites, it can be hard to choose which is the better one overall. Facebook obviously takes the lead, according to the existing charts, but there are some people who prefer MySpace anyway. With Facebook, you can find friends, message friends and add new people, use different apps and network with other people. The main issue with Facebook is the lack of security and privacy. It is not right that users have to worry about their private information being handed out to advertisers and other third-party people.

MySpace definitely takes the lead over Facebook when it comes to privacy. Most people, however, choose Facebook, because it easier to use to stay connected with the people they care about. Some people second guess their decision to use Facebook due to the lack of privacy. However, even with a certain lack of privacy, Facebook is still the number one social networking website on the Internet right now. Deciding which one you will use is entirely up to you. If most of your friends are using Facebook, it would be understandable as to why you would prefer to use this social network as well. After all, these websites are designed with the purpose of connecting people with one another. Many people have even been able to find long lost friends and family members through Facebook. What a great phenomenon!

Facebook, the number one social networking platform on the Internet right now, has some very stiff competition with Google Plus. Google plus, which was recently created just a few months...

Facebook is a well-liked social networking web site that connects millions of users from all over the world who share one common interest, staying in touch with family, friends, and...

Our personal identifying information is something that many of us try our best to protect.  It’s a common worry that an employer may “Google” a prospective employee and see what...

The great social media tool, the “water cooler” for former coworkers and the chat-it-up place for friends to stay in touch keeps changing but not an evolution of usage, rather...