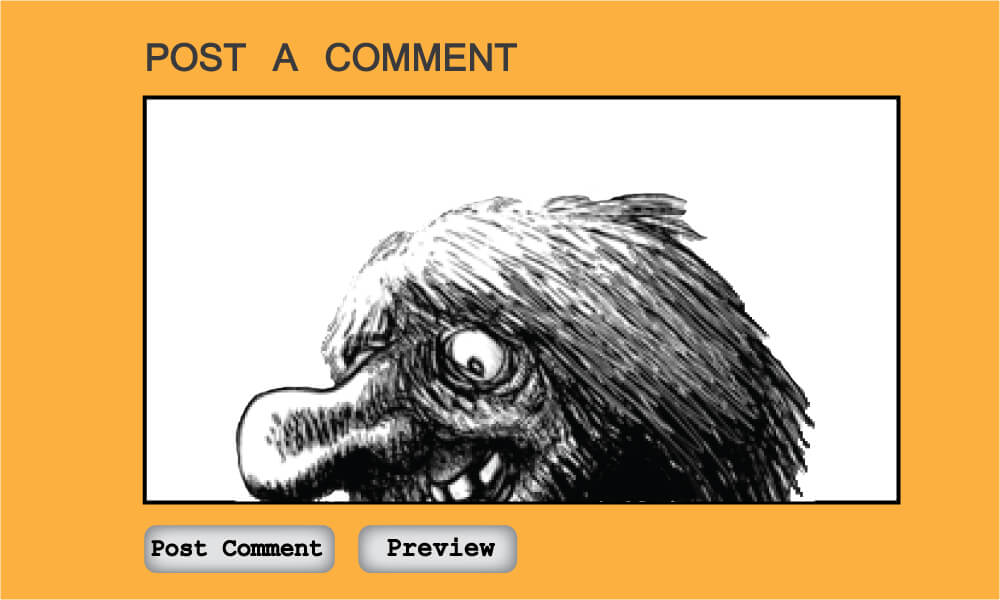 What are trolls? Why do they flame? These are important questions. We’ve discussed the pros and cons of a comments section and now, as promised, we will explore the research surrounding online comments and methods for dealing with flaming trolls.

While there really is no concrete demographic for trolls, certain characteristic behaviors are exhibited by all trolls, namely the desire to incite anger, discord, ill will, dissention, disruption and bad feelings. The Urban dictionary defines a troll succinctly as “A person who feeds off the anger of others as he enrages them over the internet.” While this definition may seem wide-ranging, “there is no particular type of person drawn to this kind of covert bullying.” And it is a particularly nasty type of bullying: one intended to disrupt, annoy, insult, anger, inflame, discredit and generally cause harm.

Flaming, as defined by Princeton, is “hostile and insulting interaction between Internet users.” This definition is milder than the one on Internet for Begginers: “Flaming entails insults, bigotry, name-calling, or any outright hostility directed at a specific person.” Both definitions are accurate, but it is important to note that flaming also often includes the use of profanity and targeted, cruel personal attacks.

So what’s the big deal? Mean people are everywhere: it’s no surprise to find them on the Internet. Most people have ignored trolls, especially those people who have never been targeted by them. But with the recent kerfuffle over comments at Scientific American, Huffington Post, YouTube, NPR, and Popular Science it is becoming increasingly apparent that trolls are having an impact. In fact, the question has even been asked: Are the trolls winning?

A study by the University of Wisconsin-Madison—used as the basis for Popular Science’s decision to shut off comments on their site–suggested that negative, insult-laden comments can change readers’ interpretation of what they have read. In other words, trolls can influence people’s memory of what they have read, even when the content was factual.

No study is needed to see that trolls chase away other users, which can lead to a loss of revenue on sites. These cyber bullies also demoralize writers and other commenters, shutting down open, honest conversation.

What can be done?

YouTube, the gathering place for the Internet’s nastiest and most prolific trolls, is trying desperately to fix the problem by changing their algorithms and creating new moderation tools. It is the first step in an attempt to shift from “comments to meaningful conversations.” But YouTube now has Google behind it: what can the average site administrator do to combat trolls?

There is no one agreed upon way to deal with trolls. Some say anonymity is the problem, but others argue that anonymity creates the open environment of the internet that allows for innovation and ultimate creativity. Assuming you aren’t going to eliminate comments on your site, here are some rules of thumb for dealing with trolls:

Set limits before you begin.

Decide what you will and will not tolerate in the comments section before you make it live. Make sure your policies for posting on the site are clearly explained on the site and that you enforce these policies. If you have a clear idea of how you will handle trolls, it will be easier to deal with them when they start spewing.

“You’re more likely to win an argument with a tree than you are with a troll.”  Don’t engage with trolls, meaning do not respond to them or do not respond emotionally or in any way that encourages their behavior or gives fuel to their argument.

Don’t allow the trolls to silence your writers or readers.

It can be hard to strike a balance when dealing with trolls. While it is important not to engage with trolls or encourage their behavior, it is important that you and your site do not lose your voice. Sometimes a response is required in order to take control of the conversation or correct misinformation that may have been spread.

Have a moderator and give him/her/them the tools they need to be successful.

“Start a posse of moderators, then arm them. Right now if you have a blog or forum or anything else with open comments, and you don’t have a human moderator to watch it, you’re going to wind up with a wasteland.” Be careful, too, that your moderator doesn’t burn out! A good moderator is hard to find: give him or her a break…often.

Writers and site contributors should never be moderators. Some content contributors pride themselves on responding to their readers, but not everyone can handle the sheer volume of criticism that is sometimes unleashed. Allow your site contributors to make their own decisions about how they will handle the comments generated by their work.

Every once in a while, turn off the comments, especially if your forums are getting heated and control has shifted to the trolls. It doesn’t have to be a long-term break (unless you want it to be), but some time off from comments will put your content back in focus.

If success dealing with trolls alludes you, you are not alone. Re-read the list above of all the big name companies that couldn’t control their comments sections as consolation and then re-evaluate your approach. Perhaps even re-evaluate the comments section on your site. It is never too late to make a change.

Whether creating a website or starting a blog, one of the important decisions to make is whether or not to include a comments section. The Internet, that glorious land of...

How To Keep Focus In Your IT Projects

Your company’s IT project implementation will bring a load of benefit to your organization as well as big transformations, whether from an individual business unit’s or whole organization’s, depending on...

CIO Perspective: Make Sure Your Disaster Recovery Plans Are Complete

have talked extensively on disaster recovery (DR) plans and I was pretty sure that I have covered everything. From the concept of moving DR to the cloud, including the issues...