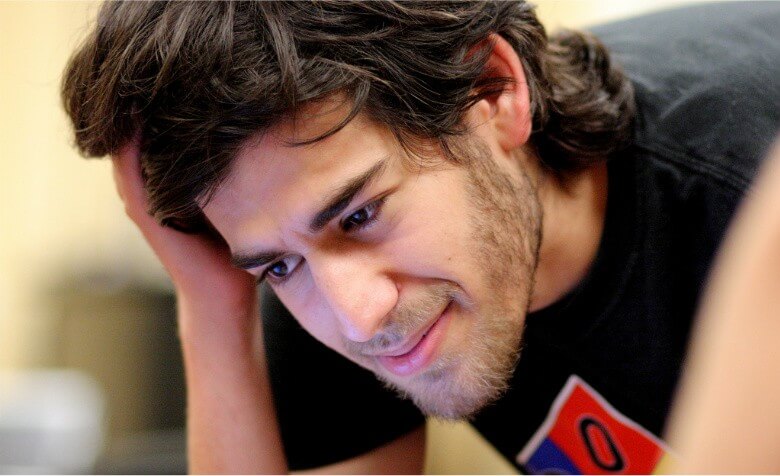 This will be the question of our decade. Swartz’s father claims the government killed him.

Many journalists assert Swartz’s brain chemistry and circumstances killed him… Baloney. Certainly his depression, added to the pressure of a high-profile lawsuit, created the perfect mix of pressure that Swartz needed to kill himself, but don’t delude yourself that it was just “mental illness.”  Some would say the legalistic tendency  to regulate every flow of information is what killed Swartz.  But that isn’t it either.

For those of you who may not know the details, let’s back up. Who is Aaron Swartz?

Aaaron Swartz was a 26 year old prodigy: in his short lifetime he helped created Reddit and RSS, the feed that allows users to follow websites all over the internet. He also co-founded Demand Justice, a group that campaigns against internet censorship and promotes social justice causes. It’s current campain is “Demand Justice For Aaron Swartz.”

What Swartz became most well-know for, however, was his high-profile breaking and entering at MIT: he illegally gained access to computer networks at M.I.T. and downloaded millions of articles from JSTOR, with the intent to distibute them.  JSTOR, which stands for Journal Storage, is classed as a non-profit but charges universities and other institutions for subscriptions of bundled scholarly journal articles online. JSTOR and M.I.T. declined to pursue a case against Swartz, but the United States chose differently: Swartz’s trial was set to begin on April 1, 2013.

Aaron Swartz hanged himself on Friday, January 11th in his Brooklyn apartment. Speculation over the reasons for his death began the moment it was publicized. Almost every article written about him mentions his struggle with depression, which may have been a piece of his death but certainly not the entire cause. As the details of Swartz’s impending lawsuit come out, including a possible outcome of decades in prison and M.I.T.’s willingness to distribute information about Swartz’s access despite that University’s policy and also despite Swartz’s request that the information be suppressed based on this policy. M.I.T. defended its actions by saying the Institution was merely trying to protect it’s network, but could not explain how the release of this information without a subpeona protected its network.

RELATED:   Can You Be Held Liable for a Website You Host?

Undoubtedly, Swartz was a hacker and hackers are not well-received in American society. Hackers have their own code, perhaps even their own morality. But Swartz also got caught in the crossfire of a war that is raging in United States and elsewhere over academic freedom, freedom of information, internet censorship and proprietary rights. Swartz knew what he was doing: he knew all the issues and he had very clearly chosen a side. M.I.T. and the United States also very clearly chose a side: that of Big Business, proprietary rights and the protection of internet censorship. JSTOR chose to remain neutral…or did it?

JSTOR and other scholarly journal aggregates charge institutions like M.I.T. big bucks to subscribe to their content. Academic libraries have difficulty keeping up with the exorbitant fees for membership to these aggregates, and many have been forced to eliminate print subscriptions or book purchases to offset the cost. University professors write for scholarly journals: these journals then sell the articles to aggregates like JSTOR. Aggregates like JSTOR then charge the same universities where the scholars work incredible amounts to download that same content. The scholars and professors, often unknowingly, support this crooked system. Why and how did the process get so muddled and incredibly expensive? What happened to the freedom of information? And why, if users can get content free through their local libraries, is it illegal to distribute that same information freely on the internet? We all know why: money and rights. Very few authors or creators retain the rights to their work anymore: big publishing companies do and these companies are the enemy of free access.

But who does this limited acces to information punish? Certainly not the students at M.I.T. who have the money for a good education and the ability to access the content. Nor does it punish those who are smart enough to know where the content is located–their public library–and the ability to access that content. This punishes the disenfranchised: those who cannot access their local public libraries, those who do not know enough to understand where information is available to them for free. These are the people Swartz was fighting for.

Who killed Aaron Swartz? We all did. Those of us who sit joyfully in front of our computers, checking out Facebook, posting to Twitter, and playing our online games. We view the internet as a gift, a fun toy that may soon be taken away. But the internet is not a gift or a toy: it is a very powerful tool. Think about all we accomplish on the internet when we use it as a tool: we find our friends, keep up with our families, research our next big purchases, search for jobs, find information about our latest maladies, look for a mate, pay our bills and express our opinions. And yet every day we sit, feeling lucky to have our internet “toy.” Every day we do, the internet is being taken away from us bit by bit by government and Big Business.

Imagine the internet in the hands of only a privileged few: all that information, all that access, only available to the chosen. Aaron Swartz understood this danger–he could see this eventuality. That was the battle he was fighting, and we didn’t see it. Not until he died for the cause did we suddenly understand the superfluous nature of the case the United States — aided by M.I.T. — was bringing against him.

We killed Aaron Swartz by inaction. Petitions like this one should have been written long before Swartz killed himself.

The Top 9 Ways You Can Foil Hackers

The word “hacker” strikes fear in the heart of many businesses and web hosting companies, and rightfully so. Hackers have become a major threat to websites, causing downtime, launching viruses...

What are trolls? Why do they flame? These are important questions. We’ve discussed the pros and cons of a comments section and now, as promised, we will explore the research...

How Would an Email Outage Affect the Web?

Have you ever been at work when your email communication goes out? Do you ever hear people around the office who say that since email is down they might as...

The Recent Cyber War: Who Won, Who Lost, and What Lessons Did We Learn?

The impact of inexpensive IT networking systems has made cyberwarfare capabilities relatively cheap initiatives compared to pursuing nuclear weapons. For instance, North Korean hackers are chosen from universities and begin...

If I were making investments, I’d invest heavily in tattoo removal. No one has figured out a perfect removal process, but when someone does it will make millions. And robotexting:...

One of the most exciting architectures to emerge in 2014 is Internet of Things (IoT). IoT uses the existing Internet to connect a wide range of embedded computing devices from...

Data Centers in China to Increase in 2015

With nearly 1.4 billion inhabitants, China leads the world in Internet traffic. It is also the second largest market for San Francisco-based CloudFlare. The online security and performance company has...