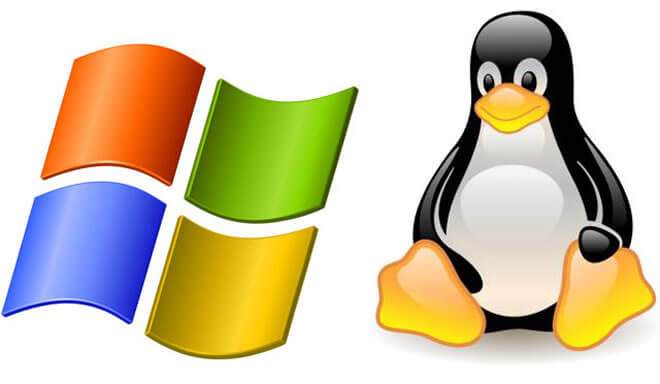 In the world of superior web hosting, there’s really only two main competitors as far as your operating system goes—unless you’re willing to be some kind of mad scientist, that is. Essentially, every webmaster must face the same battle during the earliest span of their career, staring at that blank server box while wondering, “Should I load this up with Windows, or will Linux get the job done?” We’re unabashedly pro-Linux, but that doesn’t mean there aren’t points for both. In fact, the uninitiated among us may quickly find themselves in over their heads without a little guidance. So with that in mind, we’d like to present our unbiased review of the major differences between a Windows-based and Linux-based server experience, starting from the ground up and arriving at the frilly stuff on top. And when putting the two head to head, there’s really no better place to start than with:

In terms of raw security, it’s really quite hard to do better than any available Linux distribution. This has to do with the very way in which Linux is coded—including Unix branches of the operating system, if you were wondering. Unlike Windows, Linux has a superuser known simply as “root.” To access this level of control, a webmaster must have a direct connection to the server shell, as well as the password of the server itself. Once this link has been established, an administrator can do basically anything they’d like to the server, including the hacking and stealing of precious data. However, because this level of authority requires root access—and simply cannot be had any other way—it’s nearly impossible for an artificial-intelligence based virus to “hack” into a Linux system. The probe would first need to tunnel into the server, establishing itself as a secure connection. Next, it would need to know the master password, which theoretically could be hacked, though to little purpose. Once inside the server, the bug would still need to pass several security checks to access privileged folders, guaranteeing a much harder fight than with Windows.

Windows, it’s worth noting, features little to no administrative control, a la the “root” user. Rather, the server establishes a single account as its admin, and then ties a password to that user. However, because of the registry that lies at the heart of a Windows system, it’s relatively easy for a digital worm to wind its way into the heart of the hardware, accessing files as it pleases and relaying the found data back to another server: Or worse! All in all, Linux simply cannot be bested in terms of its superior security from outside threats.

However, Windows does have the upper hand in terms of technical assistance and support. Because Windows is a proprietary operating system, it comes fully backed by a team of Microsoft specialists that will help and guide you through any unexpected errors or struggles. These lines and forums are available 24/7, 365 days a year, and can assist with any and all malfunctions. They will typically even perform some of the procedure for you, saving you the need to get your hands dirty with code.

RELATED:   Is the Next Cloud Storage Evolution Here?

Linux, on the other hand, historically comes with no dedicated technical assistance, save the community itself. And though the world of Linux troubleshooting is alive and well across hundreds of forums spread out across the globe, there’s simply no solid body to deal with the thousands of Linux variations and distributions that float freely in existence. Rather, it is ultimately the webmaster who must deal first-hand with technical complications, and if no quick solution is available, that webmaster’s server may be in real steep stuff.

That being said, Linux easily takes the cake in terms of raw overhead investment. Rare is a Linux distribution that costs anything, as most are available for free via the GNU public commons agreement. Furthermore, should some enterprising webmaster wish to create their own variation of the operating system, they’re fully licensed to do so, as Linux is typically available in its entirety for free redistribution. Windows, however, must be purchased with a server license, which can be quite expensive. Further, technical assistance and software come at a premium, where Linux is loaded to the gills with freeware packages optimized for the system. But as mentioned, this corner cutting in a budgetary sense also comes with a lack of dedicated problem solving support. The difference is really like buying a used car, as opposed to leasing one: Should a problem arise with the used automobile, you’re very likely up a certain creek without a means of locomotion. Should the leased vehicle fail, there’s always an helping hand nearby, ready to handle your needs.

RELATED:   The Recent Cyber War: Who Won, Who Lost, and What Lessons Did We Learn?

Lastly, if you’re looking for the final word in performance and up-time, Linux is hands down your top pick. A Linux system absolutely never requires a reboot because of a software update, nor does it ever necessitate a restart to unclog the processes. The operating system has been designed from the ground up to create dedicated threads for each open application, activating these threads when needed and closing them when unneeded. This not only preserves processing power, but ensures that no program can “go rogue” behind the scenes, eating away at your server’s resources and potentially causing a meltdown. Windows, on the other hand, typically faults at the background level, leaving software doors open with the lights running. To keep a Windows server clean, a frequent tune-up and maintenance sweep is typically required, in addition to an occasional system reboot. Each of these requires down-time, and without a backup server on-hand to deal with the lost connectivity, you’re potentially facing irritated end-consumers. All in all, there’s simply no more efficient way to run your server for extended periods of time—Linux up-time is typically measured in years—than with a Linux distribution.